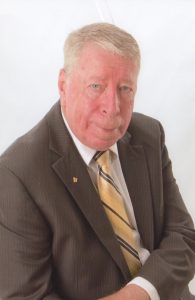 In 1963, Mr. Gaul served in the US Army and was stationed in Ft. Bragg, NC with the 12th DPU 18th Airborne Corp. A year later he was transferred to Saigon, South Vietnam and not only fulfilled his military obligation but volunteered his time working in a Vietnamese orphanage and teaching English in a Vietnamese Civilian School. For this he was awarded the Vietnam Service Commendation Award by General Westmoreland.

In 1966 Mr. Gaul joined Auerbach/Faulkner Information Company as Sales Manager and Director of Operations in both the Domestic and International Markets. He traveled extensively throughout the world, especially in the European Markets. In 1996 he moved closer to home and became Vice President of Domestic and International Sales for HAYES Inc. in Lansdale, PA. After years of working with evidence-based medicine in this leading medical research and publishing company, Mr. Gaul retired in 2005.

Mr. Gaul’s dedication to children and his love for his country and community was never more evident than when in Hurricane Katrina hit in October 2005. Mr. Gaul, then serving as President of the Upper Darby Board of School Directors volunteered with the American Red Cross and spent 8 weeks ensuring homeless victims had shelter, food, and medical treatments. Mr. Gaul sent a desperate request to UDSD for diapers for infants and with the support of the students and staff, collected over 300 cases which were then sent to New Orleans by a local transport company.

Throughout his life, Mr. Gaul has been extremely active in the Upper Darby community. Appointed by Governor Thornburg, he has served for 37 years as the Upper Darby Township Emergency Management Coordinator. Mr. Gaul is on call 24/7 for any major emergency in Upper Darby and continues to work with the Red Cross to assist residents with whatever care is needed.

Mr. Gaul is a lifetime member of the Upper Darby Township Square Club and has been instrumental in raising over $250.000 for charitable programs within the Township. A former President and Vice-President of the UDSD Board of Directors, Mr. Gaul retired after 16 years of service. He has received the “Man of the Year” award from the Rotary Club, the Upper Darby Education Association’s Distinguished Service Award and was honored in 2006 by the UDSD as a “Wall of Fame” recipient. Most recently, Mr. Gaul was awarded the prestigious “Churchill Award” by the Upper Darby Community Outreach Corporation.

The Upper Darby Arts & Education Foundation is proud to recognize the incredible dedication and service this Upper Darby Alumnus has given to children and their families in the Upper Darby School District, the Upper Darby community, and people in need across the world. #udroyalpride #udaef